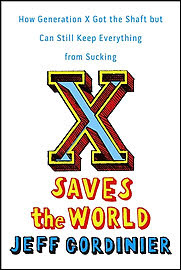 Glenn Frankel, Talking About My Generation: Baby Boomers get a full-dress history, while Gen X fights for attention.

THE SIXTIES UNPLUGGED. A Kaleidoscopic History Of a Disorderly Decade

X SAVES THE WORLD. How Generation X Got the Shaft But Can Still Keep Everything From Sucking

People today are still living off the table scraps of the Sixties,” the philosopher-king Bob Dylan once lamented. “They are still being passed around — the music and the ideas.” What Dylan bemoans, others celebrate. The ’60s remain the most controversial, creative and chaotic period of post-war American history — and the hardest to interpret. It’s all too much: the Vietnam War, three major political assassinations, the rise of the civil rights movement and women’s liberation, the supreme hubris and naivet¿ of the baby-boom generation. Not to mention the great culture wars that transported us from here to inanity: Dylan v. Barry Sadler, the Beatles v. the Archies, John Wayne v. “Midnight Cowboy,” the young Bill Clinton not inhaling at Oxford v. the Skull and Bones George W. Bush chug-a-lugging his way through Yale. It’s an era long on ear-splitting, vertigo-inducing cognitive dissonance, short on coherence.

Historians hate the idea that you can carve the past into neat little slices, era by era, like fine Velveeta, but publishers seem to love it. Gerard J. DeGroot, professor of modern history at the University of St. Andrews in Scotland, tries to please both sides by offering what he calls “an impressionistic wandering through the landscape of a disorderly decade.” Instead of an over-arching narrative, he serves up 67 short treatments of diverse moments and subjects — “shiny pieces of glass capable of being arranged into myriad realities.” It’s a clever concept, one that shows to advantage DeGroot’s sweeping range of knowledge. He’s done a gargantuan amount of research, is comfortable with the era’s characters and the movements and is a reasonably entertaining narrator, with an eye for the arresting and the unusual (it was sugar water, liberally applied, that made mod haircuts stay in place, according to one priceless passage). Besides the old, tired venues — Haight-Ashbury, Greenwich Village, Swinging London, Woodstock, Altamont — DeGroot takes us down less beaten paths to places like Jakarta, Mexico City, Prague, Biafra, South Africa and the Congo.

But in the end, his own method defeats him. He’s trying to do too much with too little. We get seven pages on the Bay of Pigs invasion, eight on the erection of the Berlin Wall, seven on the 1963 March on Washington, five on Malcolm X, four on Che Guevara, six on the Gulf of Tonkin. Most of his insights into these cataclysmic moments and people tend to bob on the surface.

John F. Kennedy, he writes, “is carelessly labeled liberal, when in fact he was something else entirely. He is celebrated as a champion of civil rights, yet his actual achievements were motivated more by pragmatism than idealism. . . . He fostered his reputation as a family man, but was actually a serial womanizer.” This is a fresh view? Or the book’s all-too-predictable verdict on Martin Luther King, Jr.: “Heroes are defenseless against Time’s erosion. Every great accomplishment is susceptible to the ravages of revisionists. In the end, King should be judged on his talents and his achievements. The world has seen few heroes like him.” Sometimes, in the effort to sound original or iconoclastic, DeGroot swan-dives into an empty pool. His account of the 1967 Six-Day War is tortured and unpersuasive. “Israel welcomed war,” he insists, adding that the country’s “embattled image was a carefully constructed myth.” Both statements are somewhere between vast oversimplification and gross distortion. The same is true of his conclusion that Israel’s military triumph did not solve its problems but rather “multiplied them a thousand-fold.” In fact the war helped establish Israel’s permanence in the region — no small achievement — even while ushering in a host of new challenges. But when you’ve allowed yourself only six pages for a watershed historical event, subtlety and nuance are the first casualties.

In a similar vein, in writing about the famous photograph of South Vietnam’s national police chief Nguyen Ngoc Loan executing a Vietcong guerrilla at point-blank range during the 1968 Tet offensive, DeGroot repeats without reservation or attribution the controversial claim that the dead man had earlier murdered one of Nguyen Ngoc Loan’s aides and the aide’s wife and children. Maybe it’s true, and maybe it isn’t; DeGroot’s once-over-lightly approach leaves no room for doubt.

That’s the problem with the ’60s — we still don’t agree on the facts, let alone the conclusions, and The Sixties Unplugged won’t bring us much closer. DeGroot’s own conclusion could be a valedictory for the entire human condition — or a useless clich¿: “The door of idealism opened briefly and was then slammed shut, for fear of what might enter. Chauvinism and cynicism got the better of hope and tolerance.”

Another generational navigator, Jeff Gordinier wears his agenda on his sleeve in X Saves the World. Sandwiched between the narcissistic egocentricity of the baby boomers and the younger, cuter and more vapid Gen Y millennials, Gordinier argues that his own generation has been “passed over. Left behind. Blown off.” He seeks to remedy this grave injustice with a screed that condemns both his elders and his youngers while celebrating the charms of his contemporaries. But lines like “A thousand Woodstocks couldn’t touch what Generation X has already accomplished through the shrewd and inspired use of media and technology” manage to sound as bombastic and desperate as the peace, love and understanding sentiments he rightly ridicules.

Gordinier is editor at large at Details magazine, where this book began life as a cheeky and occasionally hilarious meditation. His sense of humor somehow got lost in the translation from magazine to book, which is a shame. Still, he does issue an upfront disclaimer that he’s taken “attitudinal liberties” with his vast overgeneralizations that amount to “mortadella . . . really expensive and delicious baloney.” *