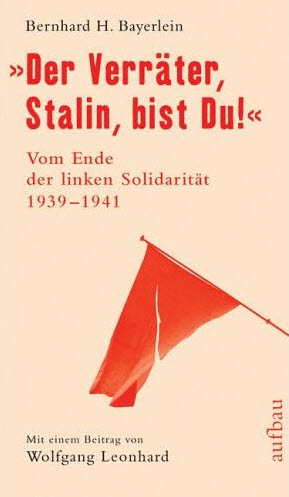 In due time before the 70th anniversary of the conclusion of the Stalin-Hitler-Pact and the beginning of World War II Aufbau Publishers in Berlin present an elaborate and thoroughly commentated chronicle of hitherto highly confidential, unpublished and less known documents  from Russian, German and Swiss Archives. The thematic spectrum of this innovative presentation of still controversial historical context and original sources ranges between two central turning points of global history:

 The rupture of Antifascism and Solidarity perpetrated by the Soviet Union and the Communist Parties at the beginning of the Second World War during the  dark years following the Stalin-Hitler-Pact from 1939 to 1941.

 The beginning of antifascist resistance within the new symbiosis of Soviet Patriotism and Antifascism since the proclamation of the “Great Patriotic War” after Hitler’s attack against the Soviet Union in June 1941.

The success story of the Soviet Union as victorious force of World War II outshined the collaboration of the two dictators Stalin and Hitler and the official “German-Soviet Friendship” from September 1941 to June 1941 when it was “Midnight in the Century” (Victor Serge). The main focus of this book is the double turn-over of the communist parties, their adaptation to the pact with Germany, and their new role during World War II after Germany’s attack against the Soviet Union. It sheds light on the decisive role played by Soviet and Comintern leaders like Stalin, Molotov, Manuil’skiy and Dimitrov and national communist functionaries like Earl Browder, Walter Ulbricht, Palmiro Togliatti; yet, room is given to reflect the role of legal and illegal communist cadres and connections all over the world, from Iceland to Yugoslavia, from China to the Unites States, from Italy to Germany.

For a first period, the book uncovers the unconcealed support to the Nazi Regime, going as far as the applause for Hitler’s War against Europe and the whole civilization  but also the hesitations, the disoriention, the discomfort and the opposition within the communist movement, as well as the intermediate positions of the Comintern since summer 1940. Resistance against the Pact came from the highest ranks of international communism, like the German communist propaganda genius Willi Münzenberg, who shortly before his mysterious death wrote a furious article against the volt-face of Soviet politics, concluding with “The betrayer, Stalin, is you!”

Further, the documents substantiate the change of polarity to anti-German resistance by all means as a consequence of the invasion of the Soviet Union by the Wehrmacht after June 21, 1941, the beginning of communist resistance in Europe and some of the consequences and contradictions immanent to the concept of the “Great Patriotic War” including the use of individual terror as war tactics by the Communist parties.

The innovative visualisation by means of collage techniques reflects the multiplicity of the new documents which became accessible through the opening of the archives: Politbureau decisions, instructions by the Comintern leadership or the Foreign Commissary Molotov, coded telegrams, diary entries, informal remarks and decisive corrections by Stalin towards the Communist Parties, letters and correspondences, programs and manifestos, orders for operations behind the lines of the occupied countries, manuscripts and manuals for radio propaganda on one hand, public statements and other types of reaction by the left and liberal intellectual elites on the other.

The elucidation of communist politics and its resonance in public opinion as a transnational and European phenomenon induces to overcome the predominance of mostly national cultures of historical memory which are still vigorous in Europe, characterized by concealment, a very late appropriation of the own history, or rhetorical readjustments and diplomatic tactics. In this sense, the book touches major taboos of historical memory and questions some of the original myths of German, French, Russian, Yugoslavian or Bulgarian history. It allows inside views into the mechanisms of manipulative mass propaganda and rhetorics described by George Orwell (elucidating Walter Benjamin’s paradigm of “inner betrayal”), which in the name of Communism and the defence of the Soviet Union until 1941 contributed to surrender Europe and the world to Hitler’s war machinery.

Read more about “The Betrayer, Stalin, is You!” at
 http://www.aufbau-verlag.de/index.php4?page=28&&show=15678 (under construction)
 http://www.dr-bayerlein.eu/index.php?act=recentbooks_verraeter